The Moscow metro in itself, is a tourist attraction. Opened in 1935 it is one of the largest transit metro systems in the world and at the beginning of the cold war, a deep section was made in the event of a nuclear war. Unlike Saint Petersburg, all the signs and stations names were in Cyrillic only, so navigating the metro was a lot more difficult.

Every station on the metro system is unique in some way. Some have interesting statues, some have nice mosaics, we even passed through one that had a temporary exhibition on the platform.

Площадь Революции (Square of Revolution), is one of the most famous stations. Both sides of the lobby are lined with sculptures representing people from the soviet union, there are 76 sculptures in total. One of the statues, a guard with a frontier dog, is believed to bring good luck to those who rub its nose. You can see on the picture that the nose is extremely polished from thousands of people rubbing it every day. I found myself doing it every time we passed through this station. 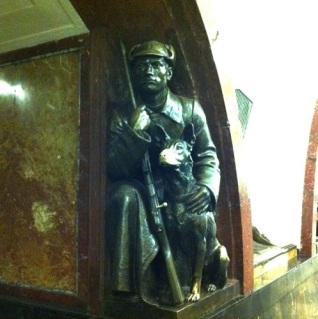 We were warned that the Moscow metro was a haven for pickpockets, but I felt very comfortable riding it and found that the London underground has far more dodgy characters. A million miles away from the awkward ‘don’t make eye contact with anyone’ rule of the London underground, or the ‘drunken charva throwing up peasant chariot’ that is the Tyne Wear metro, the Moscow metro oozes with elegance and style, just as Stalin had intended it to. And for 28 roubles ( approx 56 pence) to ride anywhere on the system, it’s a bargain! 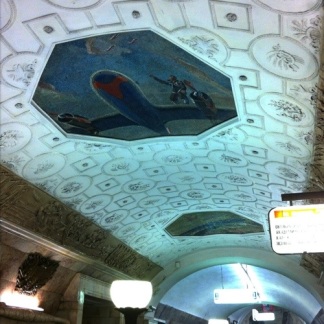 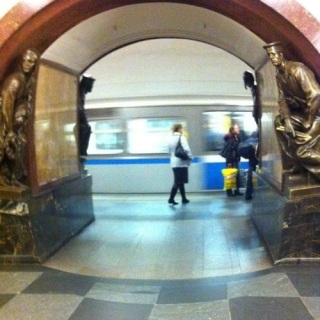