It’s been some months now since my visit to Ethiopia. The feeling I get every time I return to the UK after a trip, however long it may be, is a felling of “did that really happen?” Could it be the stark contrast between the heart of Africa and Northern England that makes the experience so surreal or the fact that I’d done so much in such a short space of time? So now that another African odyssey is in the horizon I’ve been reflecting on what Ethiopia was, or wasn’t like.

Got the shirt, but did I go there and do that?

Rather than describe old Abyssinia for how it is, it would be easier to tell you how it is not. Far too many minds conjure up images of the 1985 famine – starvation, death, children with swollen bellies, deserts and dark spectres of Africa. Yes parts of Ethiopia are very poor and there are deserts, but the majority of the country is a fertile high altitude plain, a virtual mountain kingdom.

Ethiopia emerged from the scrabble for Africa as one of the two nations on the continent to never be colonised by European powers, making it a truly unique place. There were two Italio-Ethiopian wars, but from what I saw the only influence the Italians left on the country is probably the worst spaghetti you’ll ever taste. Apart from that, Ethiopian food is delicious. Contra to popular belief Ethiopian cuisine does not consist of nothing, injera is the stable food – a sour pancake made from fermented teff (a grain grown unique to the plateau), this can be served with numerous sauces or meats varying in taste. Wednesdays and Fridays are fasting days for orthodox Christians where meat and dairy products are forbidden, so you’re basically a vegan for two days of the week, which isn’t particularly a bad thing and helps the population maintain a very healthy and balanced diet.

Locals sharing a Shiro with Injera 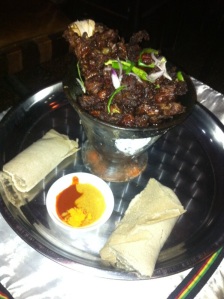 In 1582 when the rest of the Christian world dropped the Julian calendar in favour of the revised Gregorian calendar, Ethiopia didn’t. As a result Ethiopia is seven years and eight months ‘behind’ the rest of the world. So it’s 2007, that explains the droves of young indie kids sporting tight black black jeans with £6.50 army surplus store trainers prancing around to the Fratellis. Just to confuse things there’s also 13 months to a year and the day starts at 6 instead of 12. Wouldn’t it be nice to start work at Ethiopian time?

Waiting for a bus on Ethiopian time

Rastafarians worship Haile Selassie, the former emperor of Ethiopia, as God incarnate. In fact, the name of the movement is a blend of two words, the Emperor’s pre-imperial name – Ras ( the equivalent of Duke in English) and his given name, Tafari Makonnen. Many Rastafarians throughout the world came to live in Ethiopia after the emperor’s death in 1975 and set up a commune on the outskirts of a town called Sheshamane. My visit to the commune was a very short and unpleasant one. Upon my arrival at the Twelve Tribes of Israel headquarters I was immediately surrounded by a hoard of pushy, fist pumping, plastic Ethiopian Rastas, trying to sell everything from Ethiopia’s best ganja to tacky Bob Marley wigs. I had a quick conversation with the commune’s elder but couldn’t really concentrate when at the same time the chancers outside were claiming that I was in debt to them for opening the commune’s gate. There was a bad vibe from the get go so my visit was cut abruptly short. I wonder if the hustler’s frosty reception had anything to do with the fact one of us was wearing a shirt saying ‘F*ck off! I’m Irish’…

I spent my final days in Ethiopia back in Addis Ababa a city I’d grown to love. My final weekend turned out to coincide with Bob Marley’s 70th birthday celebrations, they were unveiling a statue of the man himself in the city. I attended a massive Reggae party at Jams night club around the Bole-wood district of Addis, which seemed to be a fitting end to an incredible trip. As the horn hook from Jimmy Cliff’s classic ‘You can get it if you really want’ resonated throughout the small club, I had a sudden epiphany – this Ethiopian journey has been mind blowing and life changing for all the right reasons, and proved to me that you can get it if you really want. Even if the whole thing was just a dream. LTW.