Vilnius, the capital of Lithuania, is the second largest city in the Baltics after Riga. Known for the beautiful architecture of the Old Town, an UNESCO world heritage site. We stayed at a small family owned hostel called ‘Come to Vilnius’ ran through the day by a super friendly lady called Alexandra, who made us some nice pancakes for breakfast. The currency of Lithuania is Litas (as in the former WWF Diva not the metric system unit of volume) exchange rate at the time was £1 = 4.29L

The street outside come to Vilnius

Of the nine defensive gates around the old town, only the gate of dawn remains. Inside there is a blessed Madonna, that is said to hold miraculous powers attracting the most pilgrims than anywhere in Lithuania. 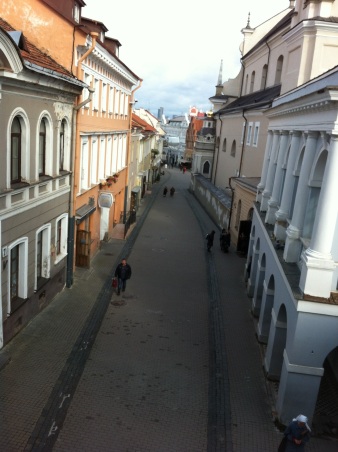 Street view from the Gate of Dawn

Took a walk down Pilies Gatve, the main commercial street of Vilnius. Called into the University and saw about 30 Japenese tourists trying to cram into one picture with the Presidents HQ. After getting lost a few times the locals are more that happy to help, have noticed whenever we ask ‘How far to the Old Town’ or ‘How far to the Currency exchange’ we always get the same answer which is ‘seven minute walk’ nothing in Vilnius seems to be more than seven minutes away…

Gedimina’s tower at the top of Gedimina’s hill is the only remaining part of the upper tower, build by the man himself, the Duke of Lithuania Gedimina. 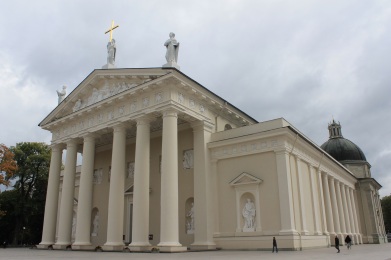 Stebuklas (Miricle) tile, located next the the Cathedral, was a starting point for a two million person human chain formed in 1989, spanning from Vilnius to Tallinn. The chain was a protest against Soviet occupation and is a sign of hope and inspiration and shows that miracles can happen. 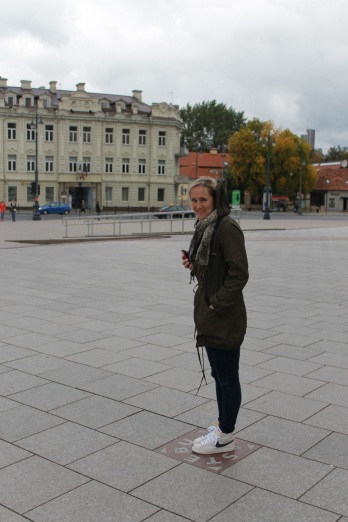 I believe in miracles

We wanted to go to the genocide museum that is a seven minute walk away, but were informed it’s closed on Mondays, which bummed me out a little. So we decided to go to Užupis, the artistic Neighbour hood of Vilnius and self declared independent state. Wanted to find the bust of Frank Zappa which was erected as a symbol of Užupis’ rebellion. Whoever we asked just give us a vacant stare of confusion, turns out not everything is seven minutes away. For the record Frank Zappa and Lithunia have about as much in common as chalk and cheese, unless of course you’re talking about Netto’s cheddar.

The trees wear jumpers in Vilnius 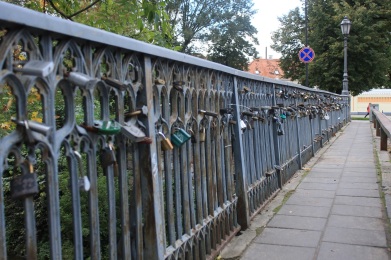 The Archangel of Užupis 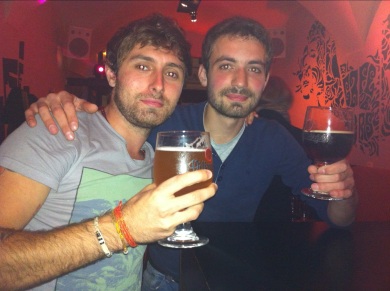 Every place in the world has its unique taste, our mission is to try as many local delicacies as possible.

The national dish of Lithuania is the Cepolinai aka ‘Zeppelins’. So named because their shape resembles a distinctive zeppelin airship.

They are a type of dumpling made from grated potatoes and usually stuffed with minced meat. When the waitress brought them out they looked disgusting, the grated potato exterior has a very slimy texture. After biting into them and preparing for the worst, they didn’t taste half as bad as they looked. The meat inside tasted like beef burger, whereas the coat tasted like a strange dumpling mix. Topped with a sour cream sauce this dish was bizarre to say the least. 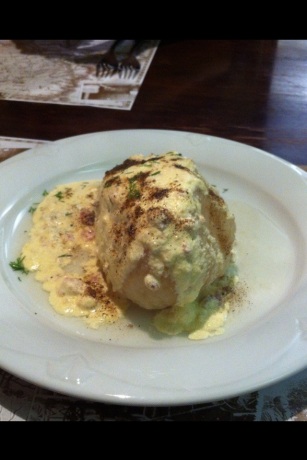